Tales of ‘The One Problem’ 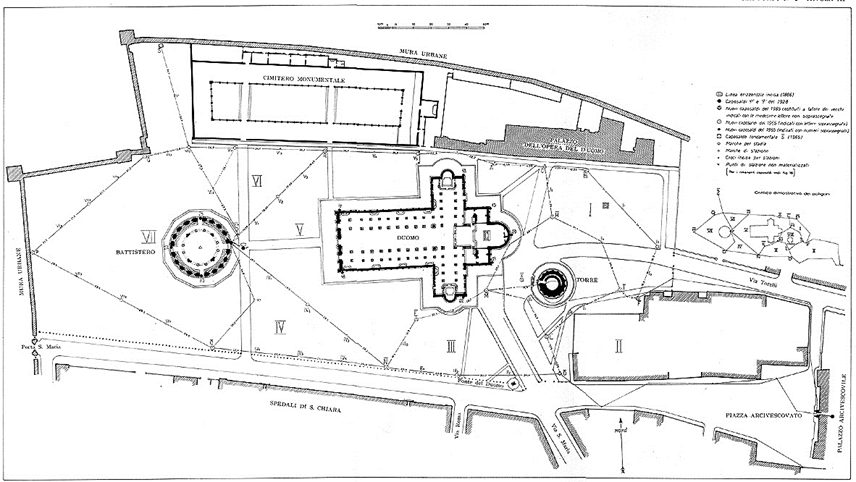 However, his campanile is world renown.

It shares The Piazza dei Miracoli (Square of Miracles) with a Cathedral, Baptistry, and the Campo Santo (Holy Field). It is perhaps the most well-known structural dysfunction in the world.

It has ‘the one problem.’

Over the years, The Leaning Tower of Pisa has attracted many visitors to see this monument of architectural wonder as it tilts defyingly against nature.

Part excitement and all novelty exists in the allure of this symbol of man’s rebellion against gravity.

Factoid: Italian scientist Galileo Galilei performed an experiment to study the equations for a falling body by dropping two cannon balls of different masses from the upper level of the tower.

Diotisalvi was a popular local Pisan architect. He was loved and respected and admired. So much so that he was commissioned to be involved with many of Pisa’s most important structures of his day. Inauspiciously, many of his buildings have ‘the one problem’ in common: The Church of the Santo Sepolcro and the bell tower of San Nicola have sunk a little as well. Although this is mainly attributed to the nature of the ground in Pisa, it is particularly notable in Diotisalvi’s buildings.

Almost immediately after the initial construction of the bell tower of Pisa, science was used to understand and manage ‘the one problem.’ And this became a problem.

Many times the situation was made worse by trying to fix it.

Despite all of the commercial opportunities being taken advantage of then and now, it still has ‘the one problem.’

The exact cause of ‘the one problem’ was not fully understood until 2001. Finally! The 800 year old mystery was solved! It was discovered that the primary cause of the tilt was a fluctuating water table.

Factoid: Pisa got its name in 600 BC from a Greek word meaning “marshy land.”

Go figure: the name said it all.

“No phone, no lights, no motor car; not a single luxury.”
– Gilligan’s Island closing theme

Born in Cleveland, Ohio, Roy Hinkley was a high school science teacher with an expertise in botany. He was a research scientist and “well-known scoutmaster.” And soon to be author of ‘Fun With Ferns.’

Roy could invent anything from the local abundance of coconuts, bamboo, and, well, more coconuts. They’ll have to make the best of things, it’s an uphill climb. He was Alfred to the castaway’s collective Batman. Q to their 007s.

However, Roy “had no talent for boat-building.”

This most important skill was missing. Roy Hinkley overcame every challenge before him. Every challenge. Every time. Except ‘the one problem.’

In the episode “Goodbye Island,” the S.S. Minnow was completely destroyed in an attempt to use a native tree syrup as a glue.

Go figure: he could not fix the S.S. Minnow.

“Well, that glue is permanent! There’s nothing on the island to dissolve it.”
-Roy Hinkley

This bent alluded him. It was the chink in his armor. ‘The one problem’ he could not fix. It’s primitive as can be.

Roy Hinkley was loved and respected and admired. He could do so many things brilliantly that no one else could. But ‘the one problem’ still remained. Week after week after week. For approximately 3 seasons.

‘The one problem’ was never resolved in part because Roy was loved and respected and admired. And this became a problem.

The problem was Roy Hinkley was “The Professor.”

“Proclaim liberty throughout all the land unto all inhabitants thereof.”
-Inscription from Leviticus 25:10

The Liberty Bell is a symbol.

It is representative of something that overcame something. It has a scar. An unapologetic scar that survivors identify with. And a story and narrative. No longer a bell, rather an icon. It has the title of a bell without the actual function.

Go figure: the Liberty Bell lost its freedom to ring.

We find this in singing as well: ‘the one problem.’

We become vocal admirers and tourists to popular singers and their leanings. We know they have ‘the one problem.’ Then they have the other problem ‘a title.’

In singing, technique and style are 2 different things. One is often mistaken for the other – to the detriment of both. Freedom rings equally for both yet liberty cracks.

Are there rewards for a mistake?

What can the art of singing learn from mistakes in other fields?

Does having a ‘title’ protect one from examination?

Millions will continue to:
-visit Pisa for the tower mistake
-watch ‘Gilligan’s Island’ and suspend knowledge of the boat-building mistake
-admire the bell and the crack mistake

BUT ‘the one problem’ is:

No one tried to replicate the mistake nor create training and schools to learn to create only the mistakes, then call it technique or style.

“People may say I can’t sing, but no one can ever say I didn’t sing.”
-Florence Foster Jenkins

Part excitement and all novelty exists in the allure of this battle of a singer’s style against technique.

Science has been used to understand and manage ‘the one problem’ of the singing voice. Despite all of the commercial opportunities being taken advantage of then and now, it is still ‘the one problem.’

Relegated to “and the rest” is the deep-seated fear of ‘the singer’ developing technique.

A fluctuating water table of the technique of the times and the stylistic conventions of the times tend to lean together in Contemporary Commercial Music.

Perhaps it is freedom to be the most well-known structural dysfunction in the world as long as ‘the singer’ has the liberty to be true to themselves.